Hello everyone! As I mentioned on my previous post, this is a board game review I had to do for the game design course I’m attending. The board game I decided to write about is the card game Koi-Koi!

Koi-Koi is a card game from Japan that began to pique my interest when I watched the movie Summer Wars from Mamoru Hosoda. Even though the movie is more focused on the virtual world, the card game makes an appearance in a very important scene where a certain character challenges the virus (that’s causing an uproar in the digital world) to a match with bets. Although it’s true that the animation and the voice actors highlighted the scene quite a lot, the game caught my attention due to the drawings on the cards and how the players needed to find a link between these in order to form combinations and earn points.

So, what exactly is Koi-Koi? As I mentioned above, it’s a 2-player Japanese card game played with Hanafuda cards (literally “flower cards”). This deck has a total of 48 cards that are divided in 12 groups of 4 (which represent the months of the year). Each month has a flower or tree assigned to it and usually consists of at least one plain card, one ribbon card and/or one special card (which are Seed and Light cards). Japan has portrayed months with trees and flowers since ancient times.

Okay, so we’ve got the Hanafuda cards’ arrangement and what they look like. But, how do we actually play Koi-Koi? First of all, we start by selecting the “Oya” (dealer) by having both players draw a single card. The player who draws a card from the earlier month is the Oya (January being the earliest), the other is the Kō. The one who becomes the Oya has the advantage since they start playing first.

Next, after shuffling the cards, 8 of them will be placed face up in the center. Then, each player will be given 8 cards to put in their hand. The remaining cards will go in the draw pile. This is when the first round starts. Beginning with the Oya, each player will take turns to place a card in the center. If there is a card of the same month, this is called a “match” and the player will be able to take both cards and add them to their point pile to start forming combinations.

Koi-Koi’s goal is to form these combinations, called Yaku, which give a certain amount of points. However, we need to be careful because some cards from different months look very similar while others are from the same month and look very different, so it can get a bit confusing. Back to the previous point, if there’s no possible match for the player when their turn comes around, they’ll still have to select one of their cards and place it in the center. Afterwards, they’ll have to draw a card from the draw pile. In the same way, if there’s a match, they will take the cards and add them to their point pile; otherwise, the card they drew from the pile will be placed in the center and the turn will pass to the opponent. There are 13 possible combinations with different sets of points:

Unlike other types of games, Koi-Koi has a rather unique way of distributing points. Each player starts with 30. At the end of each round, the number of points earned by the winner of that round will be taken away from the opposing player (30 – X points) and added to their own (30 + X points). The role of the Oya will be passed to the winner of each round; in this way, it may be possible for the player who obtained the Oya role at the start of the game to lose it if they lose the round.

How do we end a round? Aha! This is where the game gets interesting. When a player manages to form a Yaku, they can call “Koi-Koi” (come on!) to continue the round or “Agari” (stop!) to end it. If a player calls “Koi-Koi”, the turn goes to the opponent but the round won’t be able to end until one of the two players either forms another Yaku or is out of cards in their hand. There are around 12 rounds (4 for short matches): the one who gets the greatest amount of points at the end of all rounds (or when the opponent is out of points) is the winner. 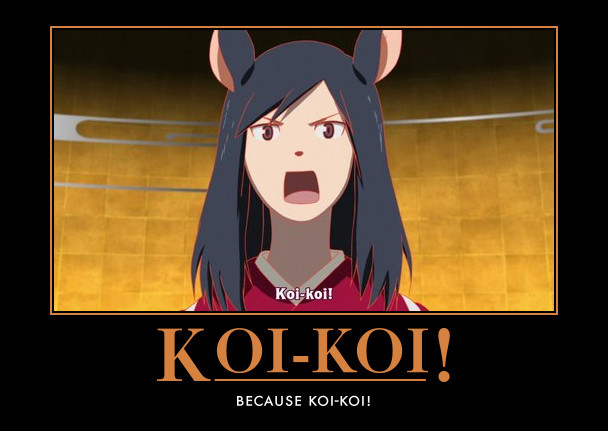 It’s important to emphasize, though, that Koi-Koi is played by local rules, so the points’ value, the number of rounds and even the way to determine the winner can vary from place to place. In fact, in my case, I played the game in 2 different ways: the physical and the digital version. Both versions have their charm but the one that turned out the easiest and fastest to me was definitely the digital one; since the game itself showed me which cards I could make a match with without having to remember all of their drawings by heart. Still, there was a small section on the right side of the screen that showed the different types of cards and possible Yakus. The problem was that, since each turn was time-limited, I couldn’t lose any second by checking out the guides. As for the physical version of Koi-Koi, although it’s true that it doesn’t have a time limit, I found it much more difficult to play (plus the pacing is slower). In this case, memory is pretty much vital since the player who recalls the cards best will have the upper hand.

Anyway, the game’s strategic value is the same no matter what type of Koi-Koi you’re playing. Although it’s true that luck plays a part because you can’t choose which cards you get, the management of those cards is what will determine which player has the best strategy in each round. For instance, even though calling “Koi-Koi” is one of the most fun and exciting things this game has to offer, calling it is not always a good strategy. Let’s suppose I call “Koi-Koi” and am currently winning the round. One possibility could be that my opponent surprises me by forming an unexpected Yaku and calls “Agari” to end the round. This would completely ruin my strategy since my opponent would take away all of the points I managed to earn until that point. In the same way, if I had a whole lot more points than my opponent and we were on the final round, he would be forced to call “Koi-Koi” in order to try to get the necessary points to surpass me. Otherwise, if he called “Agari”, he’d win the round but lose the game.

My only real critique to Koi-Koi is that, when I first started getting into the game, the rules were quite difficult to understand. This is a big problem because, if a player doesn’t get at least 80% of the game, it’ll be pretty much impossible for them to enjoy the matches; the confusion will be bigger than the tension of trying to figure out how to surpass their opponent. Basically: if you don’t get the rules, you can’t play. I know it may sound a bit obvious, but the reality is that there is a wide number of games where the rules can be learned as you play, without the need to actually read them. In Koi-Koi’s case, even though this is somehow true, since you CAN get better the more you play, if you’re a beginner and don’t get the rules before you start playing… well, let’s say you’ll be very frustrated 😆 . This is why it’s really important that the rules are explained EXTREMELY well. In my case, the rules I read from my physical game were incomprehensible. On the other hand, the rules from the digital version (Koi-Koi Japan available on Steam) were wonderfully explained via tutorial. Certainly, visual examples help a lot and what better than to make a visual novel-like tutorial with a cute anime girl wearing a kimono, right? 😆 No, but seriously, Meg is a cutie and her explanation is crystal-clear.

In conclusion, Koi-Koi is a competitive and strategic 2-player card game which is not only visually stunning but also fun, exciting and with a great deal of tension. The only thing to take into account is the fact that, for this to be true, the rules must be EXTREMELY well explained. Because of this, if you every want to give this game a try, I recommend getting Koi-Koi Japan from Steam first, before you go to a physical version.

That’s all folks! Thanks a lot for reading until the end, feel free to comment and see you next post!! (≧∇≦*)/

Stories are my life.

There’s nothing I love more than a good story. I’m a huge fan of anime, manga and video games, especially visual novels and adventures.

Besides being a reviewer from time to time, I’m an indie dev who dreams of making video games for a living. Currently, Tail Me is my only released project and I’m working on a new one on RPG Maker called Panacea. I also write short stories.

My mother tongue is Spanish, though I’m fluent in English too. I sometimes do freelance translations from Spanish to english (and viceversa) as well as proofreading. I’ve also been learning Japanese for a while; currently my level is N5!

Why Pri-Karin? Because Priscilla’s my name and Karin is my pseudonym but people call me either Pri or Karin. You can use whichever you prefer ;)