Hello everyone! It’s been like 100 years since I last posted a review about a mystery game 😆 so I decided to write one about The Darkside Detective, an indie Steam game available for Windows, Mac and Linux. The game was so well received that it even got funded on kickstarter for a second season (the first season was funded on kickstarter too)!! Woo!!

In this game, you play as McQueen, a detective who works alongside his partner, Officer Dooley, in the Darkside Divison; which is lacking in budget but filled with paranormal and occult cases. Will McQueen ever get a raise? 😆

Currently, The Darkside Detective has six cases with three bonuses that were added later. All nine of them encompass season one. This, of course, means that there isn’t a story perse, just individual episodes where McQueen needs to crack the case. Well, or actually you need to crack the cases by clicking on everything that might look suspicious 😆 . That’s right, this game is fundamentally a point and click adventure.

Each episode follows the same pattern: McQueen discovers some sort of problem (that always has to do with the supernatural), shares a few funny lines with his pal Dooley and other characters, and solves the case after a bunch of clicking on (as well as combining) useful items that might help the predicament he’s being faced with at that point in time.

The game does a very good job engaging the player with things to do, by using some easy puzzles and the point & click gameplay, as well as cleverly delivering funny lines in the different scenarios. I mean, the character designs don’t even have a face, but you can still ‘see’ their expressions and ‘hear’ the tone of their voice when they speak. There are times when they will even break the 4th wall and it’s hilarious. You can even click on McQueen and make him tell you (yes, you) to quit it 😆 .

Speaking of character designs, the art in general is simple and fitting. It’s nothing super outstanding, but you gotta love the pixel art, hell yeah 😆 . In fact, the art style kinda gives me a retro feel (and it’s great). What certainly is outstanding and very well done is the animation!! I love me some good ol’ animation, pal. The trailer already looks cool enough, imagine the full game experience!! As for the music, it’s okay and works well with the game, but it’s nothing super memorable, in my opinion.

Since the game is very casual, you don’t need to be an ‘expert gamer’ in order to complete it. True, there can be times when you get stuck (it happened to me), but really, the game is meant to be played for enjoyment and laughs, not to rack your brain. If you’re not having a good day or are feeling depressed, this game is perfect to cheer you up. Thus, grab your popcorn and start clicking!!

That’s all folks! Thanks a lot for reading until the end, feel free to comment and see you next post!! (≧∇≦*)/

Stories are my life.

There’s nothing I love more than a good story. I’m a huge fan of anime, manga and video games, especially visual novels and adventures.

Besides being a reviewer from time to time, I’m an indie dev who dreams of making video games for a living. Currently, Tail Me is my only released project and I’m working on a new one on RPG Maker called Panacea. I also write short stories.

My mother tongue is Spanish, though I’m fluent in English too. I sometimes do freelance translations from Spanish to english (and viceversa) as well as proofreading. I’ve also been learning Japanese for a while; currently my level is N5!

Why Pri-Karin? Because Priscilla’s my name and Karin is my pseudonym but people call me either Pri or Karin. You can use whichever you prefer ;) 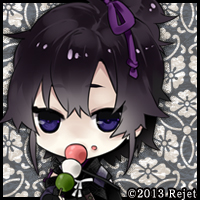